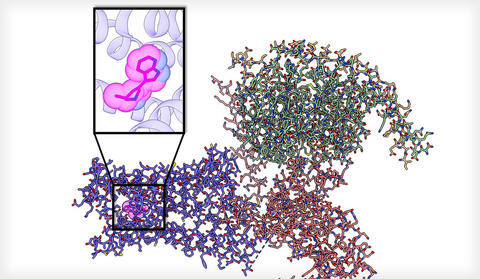 Researchers discovered what may be a new approach for creating neuropsychiatric drugs, using a virtual library of compounds derived from chemistry developed by a Yale laboratory.

The new drug candidates they’ve identified through this process could lead to treatments for disorders such as depression or anxiety without the unwanted side effects brought on by psychedelic therapies.

“The compounds we’ve identified represent exciting starting points for the development of new drugs to treat neuropsychiatric diseases,” said Jonathan Ellman, the Eugene Higgins Professor of Chemistry and professor of pharmacology at Yale, who is a co-corresponding author of the study.

Increasingly, academic labs and pharmaceutical companies are turning to virtual libraries of chemical compounds as an effective approach to develop new medications. These digital libraries provide detailed information about each compound’s three-dimensional shape and chemical functionality.

If researchers are trying to target a specific protein — one involved in triggering or inhibiting a disease, for instance — computational evaluation of a virtual library of compounds can be used to rank each compound in the database, based on that compound’s ability to interact with the three-dimensional structure of the target protein.

For this study, the UCSF labs of co-corresponding authors John Irwin and Brian Shoichet built virtual libraries of compounds based upon synthetic chemistry developed in Ellman’s lab at Yale. The Ellman lab specializes in creating compounds from simple sources that can be purchased easily.

The researchers targeted the 5HT2A receptor protein — which is also the primary target for the hallucinogenic drug LSD and the trigger for a cascade of chemical signals responsible for LSD’s psychedelic effects. Despite these undesired effects, LSD and other molecules that activate the 5HT2A receptor have generated interest as therapeutics because they also produce desirable outcomes with potential value for the treatment of neuropsychiatric diseases.

“We hoped that the new and densely functionalized compounds present in our virtual library could possibly result in the identification of compounds that activate the receptor to provide desirable effects without the undesirable psychedelic effects,” Ellman said.

The team brought in researcher Bryan Roth from UNC, one of the leading experts on the 5HT2A receptor, as a key collaborator and co-corresponding author on the study.

The researchers used their new approach to develop new compounds that would effectively and efficiently activate the 5HT2A receptor in mice. The top compounds did their work by using a different signaling pathway than other compounds, including LSD.

Additional researchers joined the effort at this stage: Georgios Skiniotis of Stanford was able to confirm the novel binding interactions of the new compounds; William Wetsel of Duke, along with Roth, performed extensive behavioral studies in mice to demonstrate the desirable anti-depressive activity of the compounds, as well as the absence of undesired psychedelic effects.

Ellman noted that more investigation of the effectiveness and potential toxicity of the new compounds is necessary and further modifications of the compounds will likely be required before they can be evaluated in humans.

In the meantime, Ellman said, the researchers plan to continue their collaboration to investigate other proteins they can target with the new approach.