Member of Yale faculty since 1966 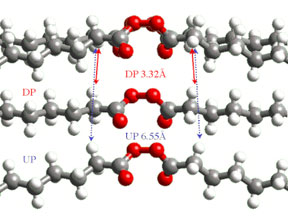 Research In much of traditional organic chemistry, experiment involves molecules in solution, and theory involves isolated molecules in the gas phase. Most organic substances in our daily lives, however, whether natural or synthetic, are solids. These range from pharmaceuticals to rocket fuels, from clothing to antibody-antigen complexes, from kidney stones to photoresists. Our research uses physical-organic chemistry to understand and control the chemical reactivity and physical properties of organic solids.

We study single crystals. Because the molecules in a crystal have identical conformations, environments, and orientations, their chemical and physical behavior is extraordinarily uniform. Furthermore, powerful techniques are available for determining and interpreting the detailed behavior of molecules in single crystals. Beyond the standard organic techniques for preparing and analyzing samples we have relied heavily on x-ray diffraction, low-temperature ESR and FTIR spectroscopy, and computer modeling, and most recently on atomic force microscopy (AFM). With an oriented single crystal one can see individual functional groups with 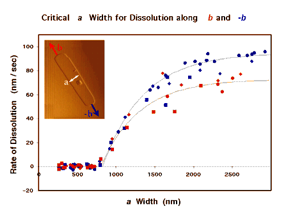 polarized spectroscopy and feel them with AFM.

Currently we work in three areas: detailed study of reaction mechanisms in photolyzed crystals to find how, and why, they differ from those in solution; study of how changes in molecular structure influence the physical properties of organic solids; and primarily on study of crystal growth and what it reveals about molecular recognition.

Our previous work on reaction mechanisms in crystalline diacyl peroxides has provided a set of experimental tools and an understanding of simple processes that we now have applied to much more complex systems. John Toscano observed as many as 60 reactive intermediates on three independent pathways in a single crystal of an important nitramine explosive, whose decomposition mechanism had remained unknown after half a century of intensive study.

We have discovered novel reaction intermediates. In one nitramine crystal Lev Ryzhkov measured a “bond strength” of only 10 millicalories/mole between radicals separated by 10Å; and in another Matthew Weinschenk found a new reactive intermediate, Y-shaped N2O2. Randy Carter explained the formation of a curious molecular diradical in crystalline decanoyl peroxide (DP). When two CO2 molecules are expelled by photolyzing the top molecule in Figure 1, the resulting nonyl radicals each abstract an α-hydrogen from the molecule below. In undecanoyl peroxide (UP) crystals, where each chain is one carbon longer, the adjacent molecules are too far away and alternative products form.

We are particularly interested in contributing to a new kind of rational organic synthesis, whose goal is to assemble not molecules from atoms, but crystals from molecules. Controlling crystal growth is a challenging goal of vital commercial and biomedical importance. Steve Bertman and Bart Kahr developed a technique using the polarizing microscope to read out the record of crystal growth stored in many “optically anomalous” crystals, and Jennifer Swift, Ben Negin, Miki Kunitake and Kraig Steffen have used AFM to study, in real time and with nanometer resolution, the influence of lattice structure, solvent, and additives on the dissolution of organic crystals. The inset in Figure 2 shows the AFM image of a pit on the (001) surface of crystalline benzoin. Each terrace is one molecule high. An in situ motion picture yielded kinetic data showing that a critical a-width of 860 molecular chains was required for the pit to elongate. Such direct observation will be indispensable in transforming the venerable art of crystal growth into a science.

We believe this kind of physical-organic chemistry will make a unique contribution to the rapidly developing field of materials science.