Originally published in YaleNews by Bill Hathaway
May 16, 2022 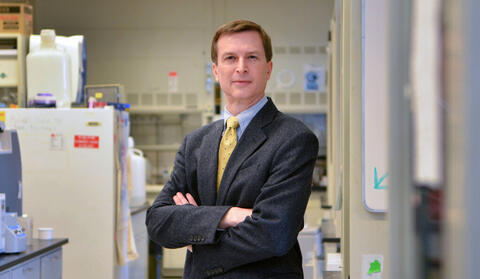 Craig M. Crews, the John C. Malone Professor of Molecular, Cellular, and Developmental Biology and professor of chemistry, pharmacology, and management at Yale, has received the 2022 Connecticut Medal of Technology, the Connecticut Academy of Science and Engineering (CASE) announced May 13.

Crews will receive his medal May 26 during CASE’s annual meeting. Also receiving a medal will be the Connecticut Center for Advanced Technology (CCAT).

Crews was awarded the medal for his pioneering research that launched the pharmaceutical field of targeted protein degradation (TPD). Crews and his colleague Raymond Deshaies, now a senior vice-president at Amgen, co-founded the biotechnology company Proteolix in 2003. Proteolix developed a therapeutic treatment for relapsed multiple myeloma. The treatment was approved by the U.S. Food and Drug Administration in 2012.

The Connecticut Medal of Technology is awarded to individuals, teams, companies, or nonprofits for their outstanding contributions to the economic, environmental, and social well-being of Connecticut and the nation through the promotion of technology, technological innovation, or the development of the technological workforce.

“On behalf of the entire state, I want to thank Professor Crews and Ron Angelo and his team at CCAT for helping to make Connecticut the great state we know it is — and congratulate them both on receiving Connecticut’s highest honor for technological achievement,” said Connecticut Gov. Ned Lamont.