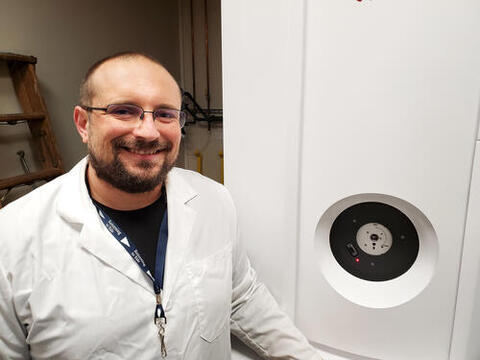 These awards are granted to promising postdoctoral associates to increase and maintain a strong cohort of new and talented, NIH-supported, independent investigators and help them launch competitive, independent research careers. The first 1-2 years provide mentored support for researchers to acquire skills with new research tools or approaches. The next phase provides independent support for up to three years during the initial stages of professorship, during which award recipients are expected to successfully compete for further independent NIH Research Grant support.

Gisriel is a biochemist in Professor Gary Brudvig’s Lab group, who studies a metalloenzyme called photosystem II, at the Energy Sciences Institute. Because photosystem II can be activated by light, Gisriel will use it as a convenient model to disentangle the steps of metalloenzyme formation and active site assembly. The research has larger implications in a variety of fields, from understanding human diseases that involve metalloenzyme abnormalities to gaining design principles in the development of synthetic solar fuels.

“Frankly, the Pathway to Independence Award is a dream come true,” said Gisriel. “In essence, the award provides me with an unambiguous roadmap to achieve my ultimate goal of becoming a tenure-track research professor. It also supports important science that will provide solutions to major challenges in human health.”

Gary Brudvig, Benjamin Silliman Professor of Chemistry, had this to say about Gisriel. “Dr. Gisriel is a phenomenal scientist who has spurred a major new research direction to my lab. His research at Yale has already yielded new high-resolution cryo-electron microscopy (cryo-EM) structures of both apo- and native photosystem II, and photosystems I and II from far-red light-adapted cyanobacteria, as well as new methods to analyze novel cofactors in cryo-EM structures. I’m excited to continue working with him during his NIH Pathway to Independence Award.”