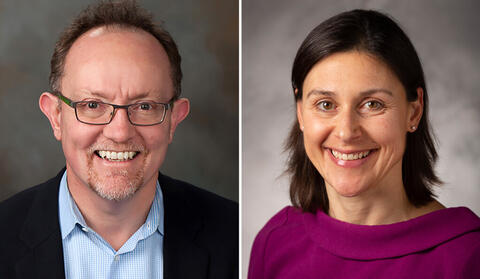 Steven Wilkinson, the Nilekani Professor of India and South Asian Studies who has served as acting dean of social science in the Faculty of Arts and Sciences (FAS) since last year, has been appointed Yale’s new vice provost for global strategy, and Jennifer Frederick, executive director of the Yale Poorvu Center for Teaching and Learning, has been named associate provost for academic initiatives, Yale Provost Scott Strobel announced this month.

Together they will assume responsibilities previously held by Pericles Lewis, the Douglas Tracy Smith Professor of Comparative Literature, who was recently appointed the next dean of Yale College.

Wilkinson is also a professor of political science and international affairs, a professor in the Institution for Social and Policy Studies, and the Henry R. Luce Director of the MacMillan Center for International and Area Studies. An accomplished scholar of comparative politics with significant leadership experience in a variety of administrative roles at Yale, he will additionally serve as president of the Gruber Foundation and oversee the Institution for Social and Policy Studies, while continuing to fulfill his duties at the MacMillan Center.

He is the author of books and articles on South Asian politics and colonial legacies for democracy and conflict, including “Army and Nation: India’s Military and Democracy since Independence” (Harvard, 2015) and “Votes and Violence” (Cambridge, 2004), a recipient of the American Political Science Association’s best book award.

“An equally adept strategic and visionary thinker, Steven brings integrity and commitment as well as wide-ranging professional experience to advancing the university’s mission,” Strobel wrote in a message to the Yale community. “He is the perfect candidate to carry forward Yale’s global strategy, especially in producing the world’s foremost scholars and scholarship in international and area studies, global health, economics, and comparative politics.”

“The last few years have highlighted how intrinsically linked our work at Yale is with the broader world in which we operate,” Wilkinson said. “It is a challenging, exciting time to consider how we can best align the university’s strategy with our mission of making a positive global impact, and our faculty and student research interests. I am grateful for the opportunity to carry forward and build on the incredible work already underway.”

Frederick, who has been executive director of the Poorvu Center for Teaching and Learning since 2014, brings a wealth of scientific and instructional expertise to the Provost’s Office, Strobel said. A champion of cutting-edge interdisciplinary and STEM teaching techniques and inclusive teaching practices in higher education, she earned her Ph.D. in chemistry from Yale, followed by a postdoctoral position in biotechnology. She held teaching and research-focused faculty appointments at the University of Bridgeport and Western Connecticut State University before returning to Yale in 2008 to serve as associate director and Science Education Specialist at the Graduate Teaching Center. In that role, she designed a suite of teaching development programs for graduate students and postdocs in STEM fields.

As the founding executive director of the Poorvu Center, she helped build an integrated center and planned for the center’s space in Sterling Memorial Library. She added to pre-existing service areas to establish expert professional teams including faculty teaching initiatives, the Academic Strategies program, and Educational Program Assessment team. She also provides leadership to support curricular innovation across campus and facilitates mentor training for research faculty.

“We are fortunate to have Jenny as a champion of excellence in teaching and learning at Yale,” Strobel wrote in a message. “We look forward to the expertise and leadership she will provide across her new portfolio, including partnering with Vice Provost for Academic Resources Lloyd Suttle on campus-wide academic support services, supporting the University Registrar’s Office, and continuing her work leading the Poorvu Center.”

Said Frederick: “There is such a wealth of teaching excellence at Yale. It has been a rewarding experience to support and amplify effective pedagogical practices through the Poorvu Center. In this new role, I am eager to further advance Yale’s goals for inclusive, integrated teaching and learning, and support the work of the University Registrar Emily Shandley and the entire registrar’s office team.”

Pericles Lewis, who is also professor of English, was appointed dean of Yale College last month. He will begin a five-year term on July 1.