To Understand Disease, Chemical Biology Expands its Horizons at Yale 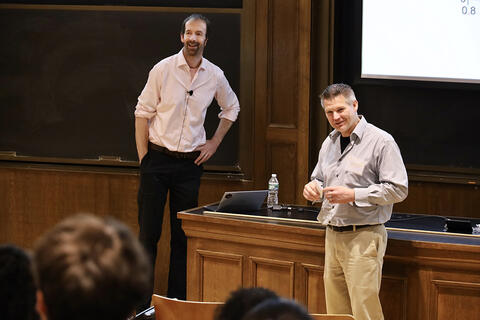 The words beautiful and creative rarely come to mind when talking about disease, but scientists often use them to describe the small molecule chemistry that reveals new paradigms for treatments and cures.

Seven chemical biology experts did just that as they shared their artful research at the Yale Chemical Biology Retreat in the Sterling Chemistry Laboratory (SCL) on October 14.

The day-long retreat, back after a two-year hiatus due to the pandemic, featured research talks from speakers in industry and academia and a graduate student poster session competition.

Chemical biology research, which is inherently interdisciplinary, brings together researchers from many departments at Yale’s Faculty of Arts and Sciences, School of Medicine, and West Campus with a common goal. They aim to solve biological problems – such as diseases, infections, and genetic defects – by using small molecules to manipulate, understand, and mimic biological systems.

“The chemical biology training program at Yale spans multiple departments, the Chemistry Department, Molecular, Cellular and Developmental Biology Department, the Molecular Biophysics and Biochemistry Department, and the Pharmacology Department. Those are our core four programs,” said Jason Crawford, associate professor of chemistry and of microbial pathogenesis, director of the Yale Institute of Biomolecular Design and Discovery, and event host, “but chemical biology has expanded even beyond our core, and we have members from Cellular Physiology, Immunobiology, and Comparative Medicine, and two of those talks will be today.” 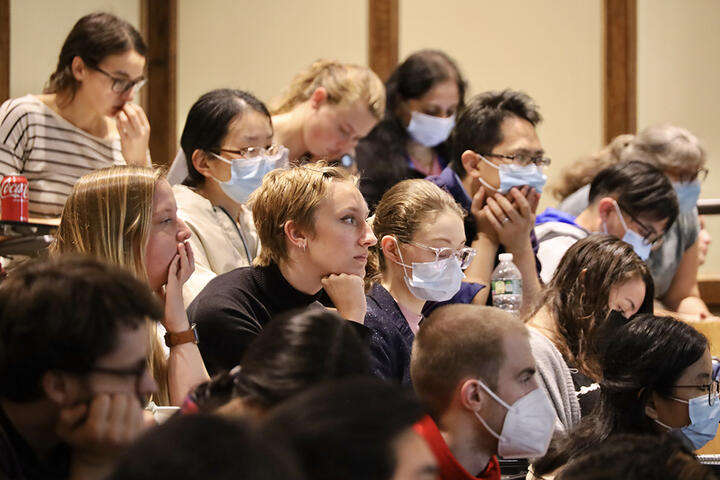 Keynote speaker Frank C. Schroeder, professor of chemistry and chemical biology at Cornell University, talked about his research on “metabolomic dark matter,” the vast numbers of small molecules in animal model systems, which play central roles in regulating growth and development, yet remain largely unknown. Discovering and characterizing these molecules could reveal new signaling paradigms and tools to manipulate and investigate biology, which could uncover new leads for drug development.

Allison Didychuk, assistant professor at Yale School of Medicine and Yale Molecular Biophysics and Biochemistry, studies the biology of the herpesvirus, specifically how the virus cleverly encodes its own molecular machinery and packages its own genomes to carry out a new infectious period. Nine herpesviruses can infect humans. These viruses can cause reoccurring rashes and cold sores and, in some cases, health complications, such as cancer or birth defects in offspring.

“This is an ongoing problem because we actually have no cure for any herpesvirus,” said Didychuk. “We are in need of small molecule drugs to help treat herpesvirus infections with the ultimate goal of finding a cure or improving preventative measures.”

The lab of David Spiegel, professor of chemistry and of pharmacology, develops new paradigms for how drugs work to treat human diseases. One such focus is on bifunctional molecules, where one head is responsible for the effector function of a molecule and the other for the targeting function. Two bifunctional programs the lab has worked on are MoDEs (molecular degraders of extracellular proteins) and ARMS (antibody recruiting molecules).

Spiegel explained, “They address specific limitations that come with conventional therapeutics,” such as toxicity from sustained exposure by degrading disease-causing proteins, rather than simply inhibiting them.

The Shen Lab studies cellular metabolism. In particular, they try to understand the function of metabolic enzymes and transporters that are implicated in organismal and cellular pathology that might be relevant to immunological and neurologic diseases.

“Oxidative stress is a problem for all living things on Earth with deep implications for human health and disease,” said Stavroula Hatzios, assistant professor of molecular, cellular and developmental biology and of chemistry. “And one of the big biological questions that motivate our work is understanding how bacterial and host cells adapt to oxidative stress during infection.”

The Hatzios Lab at the Microbial Sciences Institute uses chemical tools to discover new molecular mechanisms of host-microbe interaction in gastrointestinal (GI) infections. She described the biology of an antioxidant compound taken up by H. pylori, which infects the GI tract and causes severe gastric pathologies, such as gastritis, peptic ulcers, and gastric cancer. 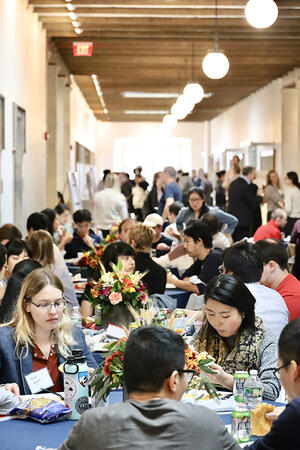 The research of Ken Huaijin Loh, assistant professor of comparative medicine at Yale School of Medicine, is on understanding brain-body interactions at the molecular scale and how the brain regulates organs involved in metabolism. He is particularly interested in using chemo-proteomic tools to discover new molecules involved in body-brain communication. During his talk, he showed how the fat-derived hormone leptin acts on the brain to affect the sympathetic nervous system inside of fat itself, which has implications for how obesity can occur.

Special guest Craig Blain, the director of RNA Biochemistry at Arrakis Therapeutics, representing the industry field, spoke about his work expanding discovery to target RNA for the many small molecule drugs that are available today.

See photos of the retreat.