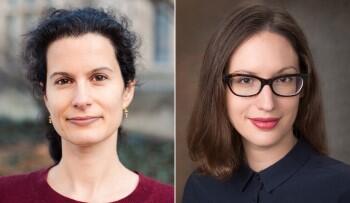 Fellow scientists nominate candidates for the fellowships. Winners are selected by an independent panel of senior scholars on the basis of the candidates’ research accomplishments, creativity, and potential to become leaders in their field.

There were 118 fellowships awarded this year to U.S. and Canadian early career scientists and scholars whose achievements and potential identified them as rising stars in their respective fields.

Frick is an assistant professor of economics who joined the Yale faculty in 2017. She is a microeconomic theorist developing models of how people make decisions and learn, with a recent focus on learning biases, decisions under ambiguity, and random choice.

“I am delighted and honored by this recognition — which also extends to my wonderful coauthors, with whom it is a joy to collaborate,” Frick said. “I am extremely grateful to my Yale colleagues for nominating me for this fellowship and for their constant support.”

Slavoff, assistant professor of chemistry and molecular biophysics and biochemistry, is a member of the Institute of Biomolecular Design and Discovery at Yale’s West Campus.

Her research focuses on developing chemical and biological tools to study the “dark matter of the human genome” — previously undiscovered, small open reading frames that encode microproteins — and its functions.

“It’s a huge surprise and tremendous honor to be selected as a Sloan Research Fellow,” Slavoff said. “The award provides a unique opportunity to advance our interdisciplinary, basic science investigations into the nature of the dark matter of the human proteome.”