Translating Sunlight into Food and Fuels — with a Tabletop Device 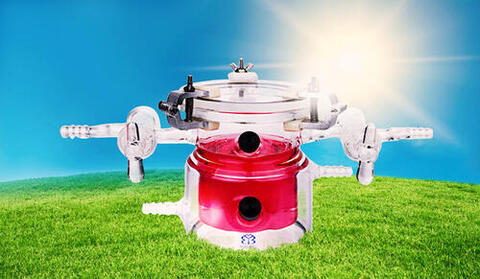 It’s just possible that artificial photosynthesis is right around the corner.

Photosynthesis is the natural process by which sunlight splits water molecules into oxygen, protons, and electrons and reduces carbon dioxide down to carbohydrates. Artificial photosynthesis is humanity’s attempt to replicate that process in order to sustainably create clean fuels and agricultural fertilizers — all powered by the sun.

Victor Batista, the John Randolph Huffman Professor of Chemistry and faculty member of the Energy Sciences Institute at Yale West Campus, is part of a new, multi-institution project that has made a dramatic leap forward in harnessing artificial photosynthesis.

The project — which recently received a $6.25 million grant from the U.S. Department of Defense — has already produced a tabletop device capable of operating for more than 3,000 hours without any degradation. The device — under visible sunlight at room temperature — is able to convert methane into the intermediate chemical benzene and reduce nitrogen into ammonia, an important building block of fertilizer.

Batista spoke with YaleNews about the project and its potential. The interview has been edited and condensed.

The idea, the main challenge for us, is to use solar light to run chemical reactions. The world currently relies on unsustainable energy resources. We’re trying to change the way we fuel our economy — by avoiding the use of oil and carbon-polluting reactions. We want to use solar light, which is clean and environmentally friendly.

There are many labs around the world investigating artificial photosynthesis. What makes your approach different?

Gallium nitride can be a high-quality semiconductor that gives us control over the selectivity of reactions and the purity of the products generated by photochemical reactions. It’s an approach that has already produced fantastic preliminary results, in terms of converting nitrogen to ammonia — a key ingredient in fertilizer — and the conversion of methane to benzene.

What are the common uses of benzene?

Benzene is an important chemical feedstock for a wide range of applications, including polymers, plastics, resins, adhesives, lubricants, dyes, and drugs. Last year it had a worldwide production of 50 million tons.

It is currently made by a reaction of hydrocarbons and hydrogen at high temperature and pressure [500 to 525 degrees Celsius and pressures ranging from 8 to 50 atm]. With our device, we are making benzene with solar light at room temperature and normal pressure. The caveat is we don’t yet understand the mechanism and thus how to scale it up for large-scale production.

You should see the prototype we have developed. It’s amazingly simple.

The photocatalytic device absorbs solar light to separate charges on the surface of high-quality gallium nitride photoelectrodes. The charges are passed to a metal catalyst on the surface where the reaction happens. By exposing specific surfaces of gallium nitride, with specific impurities, we can achieve selectivity of the generated products.

What is Yale’s role in the project?

This is an engineering result that requires further research to understand why it works and how to make it even better with higher efficiency. Yale’s contribution is the development of computational modeling techniques that will give us numerical models of this catalyst and the reaction processes that result — down to the molecular level.

One thing I’m very happy about is that we were able to convince Bob Crabtree [Yale’s Conkey P. Whitehead Professor of Chemistry] to be a senior consultant on this project. Bob is an expert in catalysis, which is a central aspect of the project.

The Department of Defense grant is a five-year grant. Will that be enough time to find the answers you’re looking for?

We already have a prototype device that you can hold in your hands. We also have all of the techniques we need to fully advance our understanding. I’m very excited about what we’re attempting to do.

Given the existential threat of climate change, do you and your colleagues feel a sense of urgency?

I would simply say that this is a very high priority. We want to lead the world effort in finding viable ways to produce fuels and commodities with sustainable methods. We want to advance our knowledge and use it for the good of humanity.