A New Path for Treating Brain Cancer, with a Yale-Developed Compound 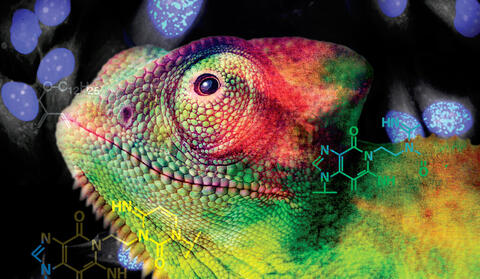 Yale researchers have developed a new class of molecules that target some of the deadliest brain cancers while sparing healthy tissue along the way.

The discovery, which combines innovative synthetic chemistry and cutting-edge mechanistic studies in molecular biology, offers a potentially powerful new approach to treating drug-resistant glioma tumors that form in the brain and spinal cord. A study describing the findings appears in the journal Science.

“A major problem in treating gliomas is that patients can rapidly develop resistance to the drug temozolomide, which has been the backbone of most glioma treatments for over 20 years,” said Dr. Ranjit Bindra, the Harvey and Kate Cushing Professor of Therapeutic Radiology at Yale School of Medicine and the co-corresponding senior author. Bindra is also scientific director of the Chênevert Family Brain Tumor Center at Smilow Cancer Hospital.

“Resistance arises from acquired genetic mutations that essentially make the drug invisible after about a year, leading to recurrence and death in most cases. For example, the five-year survival rate for patients with glioblastoma is 5%,” added Seth Herzon, the Milton Harris ’29 Ph.D. Professor of Chemistry in Yale’s Faculty of Arts and Sciences, and the study’s other co-corresponding senior author. “We set out to identify new agents that can overcome acquired resistance to temozolomide.”

There are an estimated 20,000 new glioma cases diagnosed in the United States every year, more than half of which are glioblastomas, the most aggressive subtype. It is the most common type of malignant brain tumor among adults.

Many cancers, including gliomas, are characterized by defects in DNA repair. For reasons that are not well understood, a specific DNA repair protein known as MGMT is lost in more than half of gliomas. Bindra and Herzon’s new class of molecules exploits this DNA repair defect. Their lead compound generates a specific form of DNA damage, known as an interstrand cross-link, that is highly toxic to cells.

While many agents that generate interstrand cross-links are used in the clinic for patients with cancer, most cannot discriminate between healthy tissue and tumors, leading to significant, dose-limiting toxicity. The newly developed compounds selectively generate this DNA damage in tumors but not in healthy tissue.

“In essence, we have created a tumor-selective DNA cross-linking agent,” Herzon said.

The discovery is potentially applicable to other types of tumors harboring specific DNA repair defects, a line of inquiry the researchers are pursuing. “Our discovery essentially redefines the rules on how to target cancer cells,” Bindra said.

Herzon added, “We are incredibly excited to test whether this can be broadly implemented as a therapeutic strategy for many subsets of cancers with DNA repair defects in the future.”

The researchers said they expect their lead molecule to be rapidly translated into the clinic owing to its structural similarity to temozolomide. That similarity will enable Bindra and Herzon to accelerate the scientific evaluation process, often referred to as “IND enabling studies,” which is required by the U.S. Food and Drug Administration prior to testing in phase I clinical trials.

Bindra and Herzon, who are also members of the Yale Cancer Center, said clinical trials for the new compounds could begin as early as 2024.

Co-first authors of the study are Kingson Lin, a Paul and Daisy Soros Fellow at Yale and M.D./Ph.D. student co-mentored by Bindra and Herzon; and Susan Gueble, an M.D./Ph.D. radiation oncology resident and B. Leonard Holman Pathway Fellow. Co-authors are Ranjini Sundaram and Eric Huseman. All are from Yale.

Funding for the research came, in part, from the National Institutes of Health, the CureSearch Foundation, and the Yale Cancer Center. Herzon and Bindra are co-founders of the company Modifi Biosciences, which has licensed the exclusive rights to the findings from Yale University.