New Nitrogen Products are in the Air 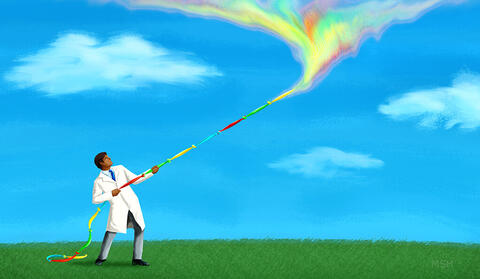 A nifty move with nitrogen has brought the world one step closer to creating a range of useful products — from dyes to pharmaceuticals — out of thin air.

The discovery comes from a team of Yale chemists who found a way to combine atmospheric nitrogen with benzene to make a chemical compound called aniline, which is a precursor to materials used to make an assortment of synthetic products.

A study describing the process appears in the journal Nature.

“In the long run, we hope to learn how to use the abundant nitrogen in the air as a resource for synthesizing the products needed by society,” said Yale chemistry professor Patrick Holland, senior author of the study.

Much attention has been focused on “nitrogen fixation,” a process by which atmospheric nitrogen is used to create ammonia. But as Holland and his colleagues point out, there are many other compounds, materials, and processes that could use nitrogen in other forms — if researchers can find ways to make them with atmospheric nitrogen.

Holland said previous attempts by other researchers to combine atmospheric nitrogen and benzene failed. Those attempts used highly reactive derivatives of benzene that would degrade before they could produce a chemical reaction with nitrogen.

“Fundamentally, we’re showing a new way of thinking about how to encourage nitrogen to form new bonds that may be adaptable to making other products,” Holland said.

Funding for the study came, in part, from the National Institutes of Health and the U.S. Department of Energy.