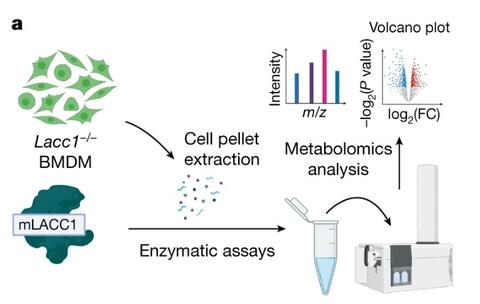 The human immune system is primed to fight off microbial invaders but sometimes it can misfire, causing inflammatory disease. For instance, an enzyme that plays a key regulatory role in the function of immune system cells called macrophages has been linked to inflammatory bowel disease, arthritis, and an inability to clear infections.

A team of Yale chemists and immunobiologists set out to explore the biochemistry of the enzyme, laccase domain-containing 1 (LACC1), and discovered that one of its products — a common supplement used by body builders — may be a potential nutraceutical to combat those inflammatory diseases. Yale’s Zheng Wei, who has joint appointments in the labs of Jason Crawford and Richard Flavell, set out to describe the biochemical steps involved in how LACC1 contributes to pro-inflammatory macrophage function in mice and humans.

For their research, the team infected mice lacking LACC1 with a strain of the Salmonella bacteria and then treated them with the product of LACC1 — the amino acid L-ornithine, which is commonly used as an athletic supplement and sleep aid. The treated mice showed a renewed ability to combat infection, leading researchers to speculate that L-ornithine may also aid in the treatment of other inflammatory diseases.

Co-corresponding authors of the paper, which is published in the journal Nature, are Crawford, an associate professor of chemistry and of microbial pathogenesis and director of the Institute of Biomolecular Design and Discovery on Yale West Campus, and Flavell, Sterling Professor of Immunobiology and investigator of the Howard Hughes Medical Institute.