Learning Some New Steps in the Energy Conversion Dance 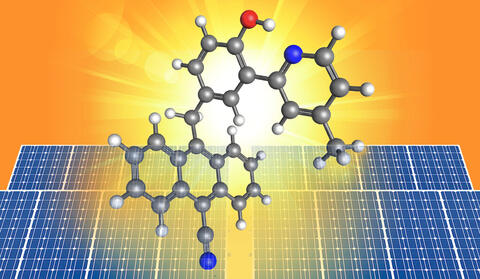 At the heart of energy conversion, electrons and protons move in an intricate, coordinated dance. Chemists at Yale and in Sweden say they may have learned the steps to a new, photo-chemical rhumba.

The discovery, published in the journal Science, could provide insights into the way the natural world converts solar energy into fuel, such as in photosynthesis. That knowledge may aid in the design of new solar energy technology and solar cells.

“Although it is rare to discover a new, fundamental type of mechanism, this molecular system was primed to reveal such intriguing behavior,” said Sharon Hammes-Schiffer, Sterling Professor of Chemistry at Yale. “This work was only possible through a strong collaboration between theory and experiment.”

Hammes-Schiffer is co-corresponding author of the study, along with James Mayer, the Charlotte Fitch Roberts Professor of Chemistry at Yale, and Leif Hammarström, a chemistry professor at Uppsala University, in Sweden.

The new study expands upon previous work by the researchers, in which they found that certain molecules, when irradiated, can exhibit an effect known as the Marcus inverted region (MIR). In the MIR, an electron transfer reaction, surprisingly, slows down as it becomes energetically more favorable. The MIR effect is considered central to the efficiency of photosynthesis, scientists say, because it slows down energy processes that are wasteful. The previous work revealed the MIR behavior for what they describe as a proton-coupled electron transfer (PCET) reaction.

However, the researchers also noted that some of the molecules they studied did not show MIR. They suspected there might be a separate, heretofore unknown photo-chemical process at work. Computations from Hammes-Schiffer’s group suggested a competing mechanism in which electronic energy transfer and proton transfer are “coupled.”

And that is, indeed, what the team found in the new study.

In a series of photochemical experiments, the researchers dissolved molecules at very low temperatures (77 degrees K, or -321 F) in a type of glass that isolated the new mechanism. After illuminating the cold molecules with light, the team observed fluorescence associated with the new mechanism, which they call proton-coupled energy transfer (PCEnT).

During PCEnT, the energy from photoexcitation in one fragment of a molecule transfers to a second fragment located in the molecule. This energy transfer does not involve electron transfer between the two fragments; it is coupled to a proton transfer occurring within the second fragment. Thus, the process is not PCET, which involves electron transfer, but rather PCEnT, which involves energy transfer.

“Electronic energy transfers between molecules or parts of molecules have long been known and are important in many light-driven processes,” said Mayer. “PCEnT seems to be the first example of photochemical energy transfer that is coupled to movement of an atom or a nucleus.”

Funding for the study came from the U.S. National Institutes of Health and the Swedish Research Council.