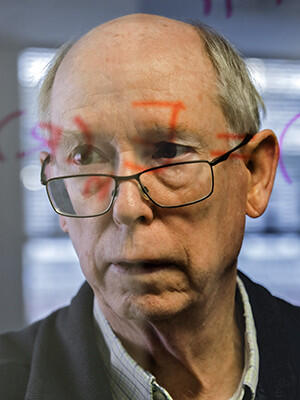 Please join us in congratulating John Tully, Sterling Professor Emeritus of Chemistry and professor of physics and applied physics on being honored by the National Academy of Sciences with the 2020 Award in Chemical Sciences.

Tully earned his B.S. degree at Yale in 1964, led groundbreaking research at Bell Laboratories for a quarter-century, and joined the Yale faculty in 1996. He is known for the development of surface hopping, a technique for including quantum mechanical effects in simulations of molecular dynamics.

In announcing the award, NAS cited Tully’s “pioneering contributions to our understanding of the rates and pathways of chemical processes in gas phase, condensed phase, and surfaces through insightful analyses and creation of computational tools such as surface hopping, which is the standard starting point for simulating molecular motion evolving on multiple potential energy surfaces.”

“I am so pleased to see John’s work honored in this way,” said Department of Chemistry chair Kurt Zilm. “His scholarship and leadership in theoretical chemistry led to the renaissance of Yale chemistry as one of the foremost theoretical chemistry departments in the world. John is a legend for his ability to bring high-level theory to bear on real-world experimental chemistry.”

The award, to be presented April 26 at the academy’s annual meeting, comes with a bronze medal and a $15,000 prize. The award was first presented in 1979, to two-time Nobel laureate Linus Pauling.

“This was a wonderful surprise,” Tully said of the honor. “It is humbling for my name to be included with this list of distinguished prior award winners.”