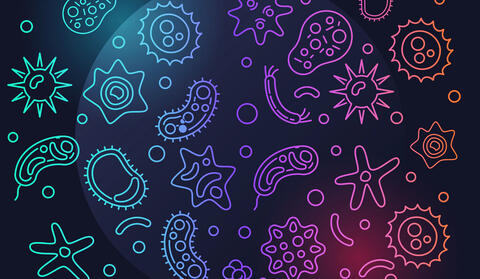 The trillions of bacteria that reside in the human gut are known to play a critical role in promoting mental and physical health. But new research shows that the gut microbiome can also harbor potential bad actors.

In a study published Oct. 27 in the journal Science, a team of Yale scientists identified a novel family of small molecule “genotoxins” produced by specific human gut bacteria that can damage host DNA and may contribute to the development of colorectal cancer.

And there are probably many additional bacterial genotoxins that remain to be discovered, the authors say.

“We found that diverse gut microbes exhibited DNA-damaging activities, which suggests that microbiota-mediated genotoxicity may be more widespread than previously acknowledged,” said Noah Palm, associate professor of immunobiology at Yale School of Medicine and corresponding author of the paper.

Previous research had identified the microbiota-derived genotoxin colibactin as a contributor to the formation of colorectal tumors in mice and humans. But colibactin is produced by just a few species of bacteria among the hundreds that populate the human gut. Thus, Palm said, “we thought that there had to be a lot more to the story.”

For the new study, a team led by Palm and first author Yiyun Cao, a Ph.D. student in Yale’s Department of Immunobiology, analyzed bacteria from patients with inflammatory bowel disease, a known risk factor for the development of colorectal cancer. After screening more than 100 bacterial isolates, they found that three unique species produced small molecules that could directly damage host DNA.

The researchers went on to identify and characterize a family of novel genotoxins — chemicals or agents that can damage DNA — that are produced by Morganella morganii, a bacterial species found in the intestinal tract of humans and other mammals. Intriguingly, M. morganii   has been found to exacerbate colorectal cancer in mice, but this effect was eliminated when the researchers prevented M. morganii from producing genotoxins.

What may be happening, Palm said, is that some bacteria develop genotoxins to compete for space within the microbiome by driving out other bacterial species. He noted that the microbiome may harbor dozens or hundreds more unidentified genotoxins.

The identification of dangerous genotoxins could improve the ability of physicians to identify individuals who may have an increased risk of developing colorectal cancer and offer scientists a target to eliminate genotoxin-producing strains of bacteria, the authors say.

The Yale labs of chemistry professors Seth Herzon and Jason Crawford also collaborated on the research.