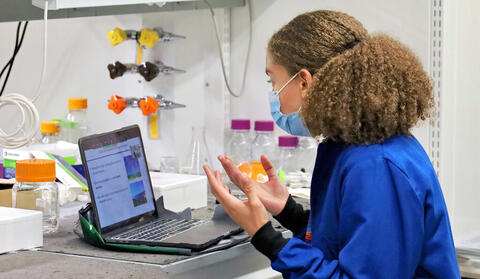 The Zoom room opened and, within a minute, more than 100 middle school and high school students joined the online webinar. They began filling the chat with greetings to one another and with comments of excitement.

The students, from schools across Greater New Haven, were joining the “Yale West Campus Showcase,” a virtual tour of the cutting-edge science happening on Yale’s West Campus. Through a series of mini-lectures and experiments, they would learn about nanotechnology, photochemistry, laser technology, and more.

More than that, the students would get a firsthand glimpse of scientists who are working in their own backyard, pursuing careers that they might not imagine are within their grasp.

The event was hosted by the Office for Graduate Student Development & Diversity (OGSDD) and the Yale Pathways to Science program, which supports promising young scholars interested in pursuing careers in science, technology, engineering, and math (STEM).

“Opening labs to local students is important because it makes the idea of being a scientist much more real,” said Josephine Jacob-Dolan, a chemistry graduate student, one of the event organizers, and an OGSDD Fellow. “I think it can be hard to imagine what a day to day in a field looks like until you can see it in action.” 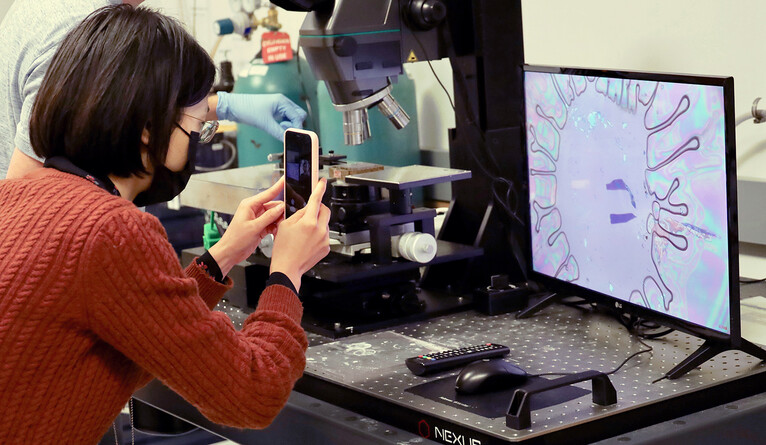 Ten students from the Graduate School of Arts and Sciences participated in the showcase. Some conducted demonstrations and presented research, while others filmed experiments and moderated Zoom Q&As.

“The West Campus Showcase is an exciting opportunity for the Graduate School to have a direct impact on middle school and high school students and to build relationships with the schools and communities in which they live,” said Lynn Cooley, dean of the Graduate School of Arts and Sciences.

The event was focused on the theme “Belonging in Science,” which was inspired by initiatives to increase diversity and inclusion in STEM fields, Cooley said.

These are also critical priorities for the West Campus community, said Uzoji Nwanaji-Enwerem, a graduate student at the Yale School of Nursing, one of the event’s organizers and an OGSDD Fellow.

“Yale’s West Campus is committed to ensuring that its communities, its classrooms, its labs, are diverse and inclusive and that no matter your background or who you are, you are able to have your voice heard and contribute to the amazing field of science,” she said. “We want to ensure all students are supported, socially connected and, most importantly, respected.”

The event, which was held online due to the COVID-19 pandemic, featured three lab demonstrations by researchers at the Energy Sciences Institute, which is focused on emerging challenges facing the environmental and energy sectors.

In one, graduate students Nia Harmon, Connor Rooney, and Bo Shang from the Wang Research Lab showed how carbon dioxide can be transformed into liquid fuels. They demonstrated two reduction reactions, a process that, through electrochemistry and photochemistry, involves the transfer of electrons.

“It’s like trading baseball cards,” Harmon, who is also an OGSDD Fellow, explained to the students. “You give one away and another accepts one.”

Dressed in Yale-blue lab coats, safety goggles, and masks, Rooney and Shang displayed a typical electrochemical cell. In their experiment, they added carbon dioxide into the cell, which held an electrode covered in a catalyst, creating a liquid fuel. Shang then showed students how to initiate the same reaction using sunlight. 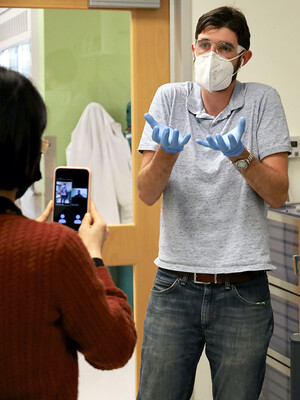 Later, Joshua Pondick, a graduate student who recently earned his Ph.D. in materials science (“Congrats Dr. Josh!” several students typed in the chat) used a microscope and optical table to show students how to stack and unstack nanomaterials. The process, he told students, is sort of like assembling “atomic LEGOs.”

Then Peijun Guo, an assistant professor of chemical and environmental engineering at the Yale School of Engineering & Applied Science, brought the students into a laser lab. Protected by laser goggles, Guo expertly weaved around the lab, explaining to his Zoom audience how to use sensor cards to visualize laser beams that would not normally be visible to the human eye.

“This main laser generates 1030 nanometer light, which the human eye cannot see,” Guo explained as he pointed to a laser. “In order for me to know where the laser is, I have to use this sensor card, which is sensitive to 1030 nanometer light and converts this light into green light so we can see where the light is.”

While the students were not able to visit West Campus for this year’s Science Showcase, the fact that the event was held online actually increased accessibility, which is one of the major goals of the Pathways to Science program, organizers said.

“We are able to show parts of the labs that students couldn’t visit in person due to safety restrictions,” said Jennifer Troiano, a chemistry graduate student and OGSDD Fellow who helped organize the event. “This allows them to see instruments and experiments they wouldn’t be able to otherwise. On Zoom, everyone gets a front row seat!”

“We are able to show off the labs to people outside of the area,” she said. “We’ve had attendees from all over Connecticut and even outside of the state.”

To inspire local students to pursue education and careers in STEM, they will need greater access to experiences beyond their own classrooms, said Michael Crair, vice provost for research at Yale.

“By working together with the Graduate School and the Pathways to Science program,” he said, “we’re able to open doors to our research labs and encourage students of all backgrounds to feel like they belong in science.”