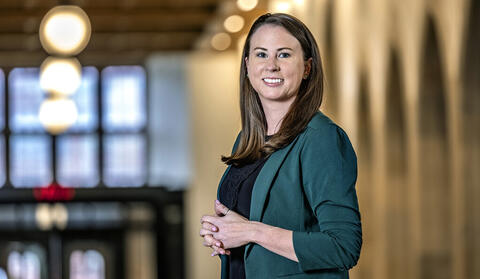 As a chemical biologist and glycobiologist, Stacy Malaker, assistant professor of chemistry, uses mass spectrometry to investigate the relationship between human disease and a group of proteins called mucins.

Mucins play an important role in numerous diseases, including cystic fibrosis, inflammatory bowel disease, and cancer. For example, 90% of breast carcinomas upregulate Mucin-1 (MUC1), and one of the only available biomarkers for ovarian cancer is MUC16, commonly known in the medical field as CA125.

Malaker focuses on the common denominator in these diseases, the dysregulation of sugar attached to different amino acids on the protein. Given that mucins are heavily decorated by O-linked glycans on serine and threonine, she studies the changes in these sugars by using mass spectrometry. 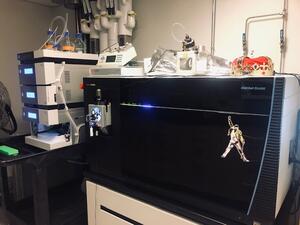 “The way that mass spectrometry works is by taking proteins and chewing them up using enzymes to make short peptides. Then we separate them, moving them from the solution phase into the gas phase by electrospray ionization,” Malaker explains. “Then the peptides are transferred into the mass spectrometer. From there, we basically blow them apart, and based on the way the peptides fall apart, we can determine the peptide sequences, the presence of sugar, and what sugar is on which amino acid.

What I’m best known for is being able to sequence these peptides with the sugars. And figuring that out is integral to decoding how the sugars change in various diseases and what underlies those changes.”

However, “nearly every step in the mass spectrometry workflow is made more difficult by studying mucins,” said Malaker. The typical enzymes used for breaking down proteins do not work on mucins. In her postdoctoral work with Professor Carolyn Bertozzi at Stanford University, Malaker characterized a new class of enzymes, called mucinases, that selectively degrade mucins. This discovery provided the foundation to be able to analyze mucins by using mass spectrometry and glycobiology to better understand their dysregulation in disease.

Today, at Yale, the Malaker Lab addresses other challenges in studying mucins. Because glycosylation is incredibly heterogeneous, typical mass spectrometry search algorithms are ineffective, and much of the data from her lab is hand curated. One of their main projects aims to discover a new search algorithm and develop software.

A further issue in mass specrometry is ionizing peptides, which are very hydrophilic, into the gas phase. A big project within her lab is to develop new ways of ionizing peptides so they more effectively enter the mass spectrometer.

At present, the lab has three projects funded by the National Institute of General Medical Sciences to characterize cancer-associated glycosylation at the detailed molecular level. Through these projects, the Malaker Lab strives to understand how glycosylation contributes to downregulating immune signaling, how altered glycans vary spatially with and around tumors, and how data processing can be streamlined in glycoproteomic experiments.

Malaker earned her bachelor’s degree in biochemistry and anthropology-zoology from the University of Michigan. She received her Ph.D. in chemistry in 2014 from the University of Virginia, where she studied enrichment and mass spectrometric identification of glycopeptides presented by the MHC class I and II processing pathways in the lab of Professor Donald Hunt. She continued to investigate the role of aberrant glycosylation in cancer as an National Institutes of Health postdoctoral fellow in Professor Carolyn Bertozzi’s lab from 2016 to 2020 at Stanford University. She came to Yale as a faculty member in 2021.

In addition to collaborating on numerous disease immunotherapy patents, Malaker works with scientists worldwide who reach out to her for glycoproteomics expertise.

She also dedicates her time to mentorship, service, and diversity outreach, speaking about her experiences as a first-generation college student and a woman in the STEM field.

Learn more about research in the Malaker Lab.