A Community Stalwart and Champion for Others — On Campus and Off

Originally published in YaleNews by Mike Cummings
May 19, 2021 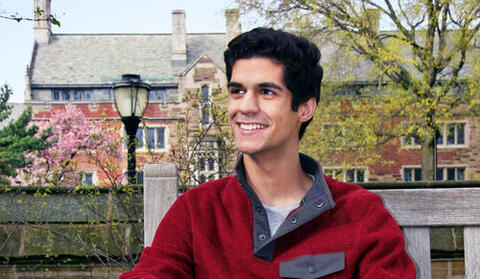 Some of Qusay Omran’s fondest memories of his undergraduate experience are the impromptu meals he enjoyed with friends in Berkeley College’s dining hall.

“There was something special about the spontaneity of running into friends in the dining hall and bonding over dinner,” Omran said. “I’ll miss it.”

Omran, a chemistry major, embraced residential-college life at Yale. As a first-year student, he joined the Berkeley College Council, later serving as its secretary. He became a Berkeley College aide, organizing events and doing what he could to make his neighbors feel at home. His devotion to the community earned him Berkeley’s Fellows Prize, presented annually to the senior who has “brought the most light and air” to the college.

“He is one of those people who can make anyone feel welcomed, heard, and cared for,” stated one of the many nominations for the honor Omran received from the college’s senior class. 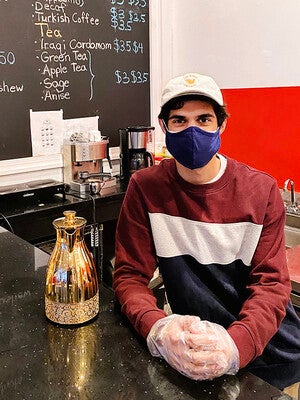 During the pandemic, Omran served as an
intern at Havenly Treats, a local non-profit
organization that operates a community café that
provides support to women in the city’s refugee
community.

Omran also took time to help his neighbors in the New Haven community. During the pandemic, he has served as an intern at Havenly Treats, a local non-profit organization that operates a community café that provides support to women in the city’s refugee community.

Born in Bahrain, Omran’s family immigrated to the United States in 2011. Working with the refugee women, who hail from Syria, Sudan, Guatemala, and other countries, helped him to better understand the hardship of displacement, he said.

“It gave me perspective on my own journey, which was relatively privileged,” he said.

Omran, who plans to apply to medical school, took advantage of the opportunities Yale College offers undergraduates to explore a variety of interests. He worked in the lab of Anna Marie Pyle, Sterling Professor of Molecular, Cellular & Developmental Biology, examining the dynamics of self-splicing RNA. He also served as co-editor-in-chief of the Yale Review of International Studies, an undergraduate journal covering global affairs. Both experiences were invaluable, he said. One provided him key mentorship in chemical biology — the focus of his major — and the other fed an interest in international relations.

“I appreciate Yale’s ability to open up those doors for me,” said Omran, who will start a job at Fog Pharma, a biotech firm in Cambridge, Massachusetts, shortly after graduation. “The mentors I’ve had at Yale have been amazing. They’re all in my head cheering me on when I try something new. I hope to pay that forward someday.”