Bright Future for Crops Revealed by Photosynthesis in the Shade 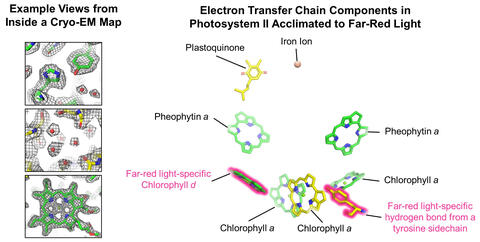 Using cryo-electron microscopy, an international team of researchers uncovered key principles in the molecular design behind how some photosynthetic microorganisms, called cyanobacteria, use low energy light prevalent in shaded environments. The finding will inform the production of shade tolerance in crops.

“The sun provides a huge range of light wavelengths. Most photosynthetic organisms, like the plants you see outside, use only the visible part of the solar spectrum from blue, which is higher energy, to red, which is somewhat lower energy. Down in the lower levels of the canopy, and in the soil just beneath the surface, all that useful light is gone – captured and used by the plants above it. Some very low energy light is left over, part of the infrared region of the solar spectrum, called ‘far-red light.’” During the last decade, researchers have discovered that certain photosynthetic microorganisms, called cyanobacteria, have adapted to use this very low energy, far-red light,” said Chris Gisriel, lead author on both of two companion papers published in the Journal of Biological Chemistry and a postdoctoral researcher in the Brudvig Lab in the Department of Chemistry at Yale University.

“If we could understand how these cyanobacteria use far-red light, we might be able to implement the same ability into our crops. This would allow for optimal crop growth even when light conditions are suboptimal. For example, shorter, genetically-engineered shade-tolerant crops could be grown below taller crops that use the higher energy light, allowing for more efficient land use. It would increase biomass production that could alleviate a wide range of problems from food shortages to fuel production challenges.”

In photosynthetic organisms, two protein complexes are responsible for using the energy from light to fuel metabolism: photosystems I and II. This is where the key changes occur that allow for the use of far-red light. “These protein complexes are wonderfully complex and have so much to teach us,” said David Flesher, a co-first author on one of the papers. “We’ve learned that subtle structural changes in the protein cause binding of unique chlorophyll pigments that allow for utilization of far-red light. Studying these molecular design principles provides inspiration to engineer these same principles in plants.” 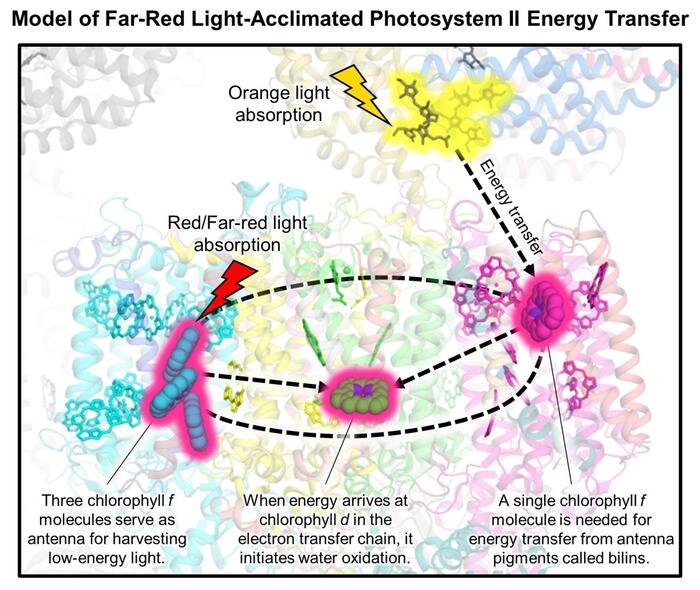 “Understanding the architecture of the far-red light-using photosystems, particularly the insertion and function of chlorophyll f and d molecules into them, is of major interest to researchers. With this knowledge comes a better understanding of the diversity of acclimation mechanisms for photosynthesis in nature and processes to derive design principles for tuning light absorption in crops. Until now, the exact binding sites of chlorophyll f and d molecules have been a mystery,” said Donald A. Bryant, Ernest C. Pollard Professor in Biotechnology and professor of biochemistry and molecular biology at Penn State and co-leader of the research team.

To achieve this, the team revealed the cryo-EM structures of both photosystem I and photosystem II that were isolated from cyanobacteria acclimated to far-red light.

“This is breakthrough work that defines the structural basis for the lower energy limit of oxygen-evolving photosynthesis. The results provide design principles for engineering both natural and artificial photosynthetic systems that utilize far-red light,” said Gary Brudvig, Benjamin Silliman Professor of Chemistry, professor of molecular biophysics and biochemistry, director of the Energy Sciences Institute at Yale’s West Campus, and also co-leader of the research team.

Gisriel concluded by noting that the milestones presented in these papers were achieved by a concerted effort of collaborating scientists from Yale University, The Pennsylvania State University, University of California, Riverside, Boston College, City College of New York, Louisiana State University, and National Taiwan University. Furthermore, the research was generously supported by the Department of Energy, the National Science Foundation, and the National Institutes of Health.

Since its founding 1846, the Department of Chemistry at Yale University has been at the forefront of chemical research, from the most fundamental and basic to the most economically and socially relevant applied chemistry. Eleven chemists associated with Yale have received the Nobel Prize. Faculty explore solutions to the most pressing problems of modern time, such as alternative-energy vectors to replace fossil fuels, carbon emission capture and utilization, practical quantum technology, disease treatment and prevention, inflammation, drug discovery, computer and data science, and sustainable industrial practices. Consistently recognized as one of the top best chemistry programs by U.S. News & World Report, the department teaches undergraduates and trains Ph.Ds. and postdoctoral fellows in chemistry, who go on to leadership positions in academic and industry professions.