Member of Yale faculty since 1955.

Our work has focused on three areas of organic chemistry. The recently discovered, soccer-ball shaped, sixty-carbon molecule Buckministerfullerene and its larger relatives (the fullerenes) have excited a great deal of interest and study. These molecules all have the intriguing feature of possessing cavities surrounded by cages of carbon atoms. We have demonstrated that all of the noble gas atoms, including xenon, can be introduced into and trapped within these cavities. We are presently investigating the properties of these novel systems which can be described as atoms in molecular cages. We have already shown that the rare isotope helium-3 can be introduced in quantities sufficient for its observation by NMR. The sharp helium NMR peaks in different chemically-substituted fullerenes cover a wide range of NMR shifts and have given us valuable information about the aromatic character of the fullerenes. They are also useful in following the many addition reactions which attach groups to the outside of the fullerene and in following processes which open windows in the cage to release atoms.

Most organic molecules are flexible and occur in geometrically different, rapidly-interconverting forms called conformers. We have been working on developing and using powerful computer-search methods for finding all of these conformers and predicting how much of each will be present at different temperatures. Many properties of these systems depend on the composition of these equilibrium mixtures of conformers.

A number of carbocations can be prepared as stable salts and studied using NMR. We have found that many of them are undergoing very rapid rearrangement reactions, rapid enough to result in average NMR spectra at some temperatures. The rates of many of these processes can be measured using NMR line-shape methods but some of them occur too rapidly for such study. In such cases, the spectrum does not distinguish between a very rapid interconversion of chemically equivalent isomers and stable symmetric structures with fractional bonds which have been called non-classical carbocations. We have found that the introduction of isotopes so as to break the symmetry often induces changes in the NMR (isotopic perturbations) which can tell us what is happening. 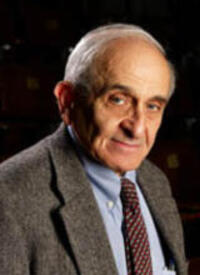