The objective of our research is to achieve a theoretical understanding at the molecular level of dynamical processes such as energy transfer and chemical reaction in the gas phase, at surfaces, in condensed-phases, and in biological environments. This entails both the development of novel theoretical and computational tools, as well as their application to exciting chemical problems, with direct coupling to experiments wherever possible. Current theoretical activities include mixed quantum-classical dynamics, nonadiabatic path integrals and constrained density functional theory for computing “diabatic” excited electronic states. One ongoing application is the simulation of chemical dynamics at metal surfaces, a challenge because of the importance of nonadiabatic excitation of conductions electrons. This is illustrated in the contour diagram, which shows the negative charge on a nitric oxide molecule as it approaches a gold surface. The strong dependence on N—O bond length underlies the high efficiency of vibrational to electronic energy transfer in this system. 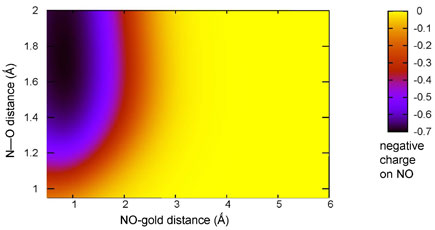 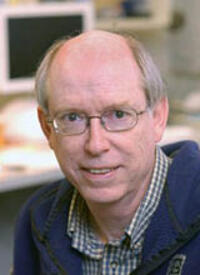