Member of Yale faculty since 1997 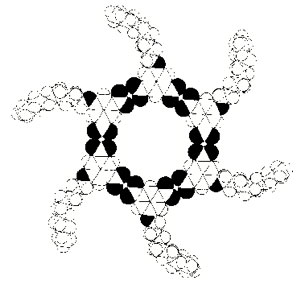 Research A problem of primary importance to Professor Hamilton’s group is molecular recognition. In contrast to enzymes, there are relatively few synthetic species capable of recognizing and binding selectively to other organic molecules. Hamilton’s group has used careful design and computer modeling to construct a family of receptor molecules containing hydrogen bonding, electrostatic and hydrophobic interactions. In recent years synthetic hosts have been developed for such key biological molecules as nucleotides, peptides, dicarboxylic acids, small molecule drugs, and carbohydrates. Detailed structural (using NMR and X-ray crystallography) and thermodynamic analysis of substrate binding provides important insights into the process of molecular recognition and the involvement of different interactions. A recent interest has focused on proteins and involves a chemical approach to both stabilizing and recognizing key secondary structural features. Molecules are designed to recognize amino acid residues in a-helix or b-turn conformations on the surface of a protein. We have also begun a program in which synthetic molecules defining a large surface area are targetted to recognize and bind to the surface of proteins involved in cell-signalling and other key biological processes. We hope this work will lead to new strategies for disrupting certain protein-protein interactions involved in disease.

Effective catalysis requires the selective stabilization of the transition state of a reaction over its ground state. A major goal of the group is to use the subtle recognition properties of synthetic hosts to achieve transition state stabilization. The group has developed a novel combinatorial library approach to artificial receptors which can be used in identifying both strong binding hosts and highly active catalysts.

A third major interest in the design of molecular subunits that self-assemble into defined, non-covalent aggregates in solution or in the solid state. We have shown that carefully positioned hydrogen bonding groups can be used to control, in a well-defined and predictable way, molecular packing patterns in crystals.

A final, important area of interest is medicinal chemistry. The group is applying improved understanding of molecular interactions to the design of molecules that disrupt molecular machinery inside cells. A particular target has been the enzyme farnesyltransferase, which places a lipophilic group in the key signaling protein Ras. Small molecule inhibitors have been found to inhibit this enzyme and, as a consequence, to halt the growth of cancer cells in human tumors. We are further developing this strategy to prepare improved anticancer drugs and are also attacking other targets in signal transaction and cell cycle pathways.Please note that I am not taking any more students into the group.