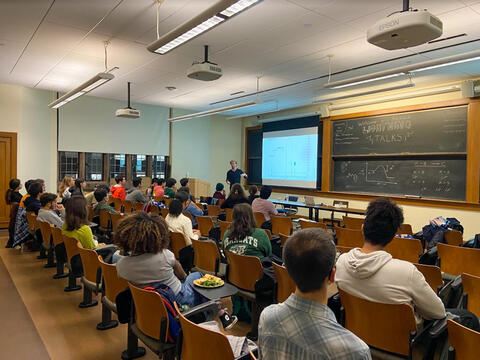 The Chemistry undergraduate peer mentors hosted a series of Lightning Talks to share their path to chemistry research with undergraduate students interested in chemistry or STEM on October 24.

An audience of 40 first- and second-year students listened to several 10-minute presentations from junior and senior-year students Cameron Germe, Deniz Ince, and Gurjot Singh. They learned about current research projects, how to get involved with chemistry research at Yale, what to expect in the first year, and career trajectories.

During his talk, Cameron, an undergraduate researcher from the Hazari Group, demonstrated a dual catalysis system for cross-electrophile coupling. The long-term goal of most projects from the Hazari Group is to develop homogeneous transition metal catalysts for chemical transformations, which could result in the development of more energy-efficient and affordable industrial processes.

Deniz, an undergraduate researcher from the Malaker Lab, spoke about analytical techniques to study mucin-domain glycoproteins, which are commonly dysregulated in numerous diseases, including cancer, cystic fibrosis, and inflammatory bowel disease.

Gurjot, an undergraduate researcher from the Mayer Lab, spoke about his studies on the synthesis and energetics of triphenylmethyl radicals. The Mayer Lab is using these radicals to understand hydrogen atom transfer, one of the simplest chemical reactions.

The presenters showed that Yale Chemistry research is exciting and on the cutting edge of finding answers to some of our biggest problems.