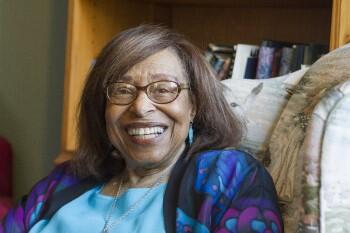 Esther A.H. Hopkins ‘67 Ph.D., whose passion for science, advocacy for environmental justice, and commitment to her community made her an admired chemist, environmental attorney, and politician, died May 19 in Martha’s Vineyard, Massachusetts, of old age. A beloved member of the Chemistry community, she was the first African American woman to graduate from Yale with a Ph.D. in chemistry. She was 94.

Intelligent, trailblazing, selfless, and guided by a strong sense of integrity, Hopkins was called to pursue careers in science, law, and politics. Her early career was as a supervisory research chemist with the Polaroid Corporation, where she led the Emulsion Coating and Analysis Laboratory, checking the chemical composition of Polaroid film strip coating. While working at Polaroid, she attended Suffolk Law School, where she received her J.D. in patent law in 1976. In 1984, she began work at the Massachusetts Department of Environmental Protection as the Deputy General Counsel. This role led her to become the first and only African American elected selectwoman in the town of Framingham. She served on the Board of Selectmen from 1999 to the early 2000s and was the Board’s first African American chair. After stepping down as a selectwoman, she became a member of the Keefe Technical Regional Vocational School Committee and was involved in the Framingham Finance Commission and Framingham’s Tercenntenial Celebration.

“Esther was an inspiration to every student pursuing an advanced degree starting from a non-traditional background. Not only was she the only African American in the department when she carried out her thesis, she started her Ph.D. studies nearly 20 years after having graduating from college, working in industry, and while raising two children with her husband,” said Kurt Zilm, William K. Lanman Professor of Chemistry and department chair.

“Esther’s thirst for education, her multiple degrees, and her long-term relationship with higher education was also very impressive,” said Cheryl Tully Stoll, former Framingham City Councilor. “What touched me most about Esther was her effort and actions to make other people’s lives better. She worked for culturally appropriate health care services for all people; she provided a strong voice in local government for those who otherwise wouldn’t have had one; she served as an inspiration to all of us who want to serve others. Esther Hopkins was one-of-a-kind, and Framingham was richer for her having lived here.” 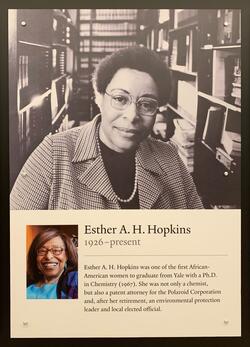 The Chemistry Department had the great honor of hearing from Hopkins at the Celebration of Women in Chemistry symposium in 2020 as part of the 50WAY150, a commemoration of the 50th anniversary of coeducation in Yale College and the 150th anniversary of women students at the university. She spoke about her education, career, and struggles as a double minority – Black and female – in science.

With a love of math and chemistry, she had her sights on medical school, but it was never to be. Hopkins initially applied to Yale, her first choice, and was rejected because the university wasn’t co-ed in 1943. She pursued pre-med at Boston University and graduated with a B.A. in chemistry in 1947. She then received an M.S. in physical chemistry from Howard University in 1949 and taught chemistry at Virginia State College for a brief stint before pursuing research. She became an assistant researcher of biophysics at the New England Institute for Medical Research. Then she worked as a chemist at American Cyanamid in Stamford, Connecticut. She applied again and was accepted to Yale, where she received her second M.S. in chemistry in 1962 and Ph.D. in chemistry in 1967. Her dissertation focused on the effects of adenosine diphosphate – a chemical compound necessary for cells to function –  in fireflies.

According to the Martha’s Vineyard Times, Hopkins’ racism story was one of the limitations set on Black women in a white, male-dominated academic and professional society. As she explained at the Celebration of Women in Chemistry symposium, she was rejected from BU’s medical school because the quota only allowed for two African American students at the time. And at Yale, she recalls a professor questioning the women in class as to why they were taking the place of men, who would have to support their families and divert their own research. During her Ph.D. program, she and her family – her husband, son, and daughter – made the tough decision to live off of the current welfare diet, heavy on “skim milk, butter, and big chunks of cheese.”

“And so eventually, the grandniece of a field slave got a Ph.D. from Yale, and I didn’t have to get over that experience from Yale. The experience itself, the stress of always being worried about what’s going to happen to you or what might happen to you and your family, really puts you in a position where you’re tense, you’re tense, very tense. It took me about ten years to get over that,” said Hopkins.

“And then I got to feeling very much that Yale was my sword and my shield. And the fact that I had survived through it, that I had proven that I could understand and stick with it. I can make a contribution to the literature with my dissertation. I felt ever so much better about Yale at that point.”

Hopkins proceeded to navigate her career in an unjust, biased system. When she wanted to pursue research in a prestigious hospital, she found she “couldn’t be a Black woman in a white male environment and [a] Ph.D. in an M.D. environment.” She joined Polaroid, which had a dedicated program to increase diversity. But still, Hopkins struggled with being at the intersection of Black and female.

In a 2012 interview with The HistoryMakers, Hopkins had this to say about her hopes and concerns for the African American community today. “I hope that when we have bright leaders like Barack Obama that we can listen to the sort of things that he is doing and that we can become more than just entertainers or just sports figures, and we can encourage our young people to want to be more than just entertainers [or] sports figures. And I hope that we all remember one another when we get to be somebody, that we can remember that there are others of us who have desires also and want things for their children, and that we can be encouraging of one another. That we not, was it Booker T. Washington who said, we were like crabs that when one climbed up, the others would reach up and pull ‘em back in. We need to get over that. We need to be helping one another out of the barrel and into places where we can go.”

The Celebration of Women in Chemistry symposium is available to view here. Hopkins’ interview starts at minute 22:26.