Spoiling Spuds with a Pathogen Trick 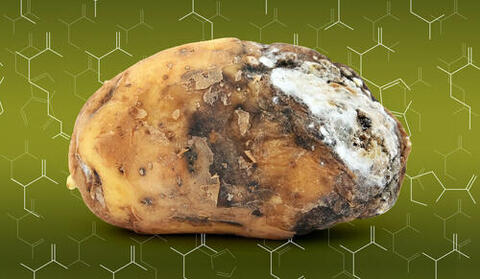 To the bane of potato farmers, bacteria that invade plants have developed a neat trick — they can essentially alter their own genetic code. Yale researchers have discovered that bacteria from the genus Streptomyces can deliberately mistranslate their own genetic instructions.

While Streptomyces is best known for being a rich source of antibiotics and other bioactive molecules, a small group of Streptomyces species are pathogenic and wreak havoc on annual potato crops. Yale’s Oscar Vargas-Rodriguez and Sergey Melnikov, both from the lab of Dieter Söll, the Sterling Professor of Molecular Biophysics and Biochemistry, discovered how these bacteria manage this feat.

According to the rules of the genetic code, proteins that carry out cellular functions are created from combinations of 20 different amino acids. The specific combination of amino acids within a protein is based on information stored in the DNA and translated by the ribosome, the cell’s protein-making machinery. Key components in this process are aminoacyl-tRNA synthetase enzymes and transfer RNAs (tRNAs).

The Yale team found that some Streptomyces have evolved a new pair of aminoacyl-tRNA synthetase and tRNA molecules that allow the bacteria to change the genetic instructions contained in DNA and insert the amino acid proline at positions that should contain alanine. Essentially, the process allows the bacteria to mistranslate instructions from its own DNA, thereby altering the biochemical architecture of its proteins. Söll and Vargas-Rodriguez speculate that, for the bacteria, having the ability to quickly diversify their protein pool may be a key survival tool in times of stress, and possibly serves as a mechanism to avoid a plant’s immune defenses or increase pathogenicity during infection.

Their study appears in the journal Proceedings of the National Academy of Sciences.