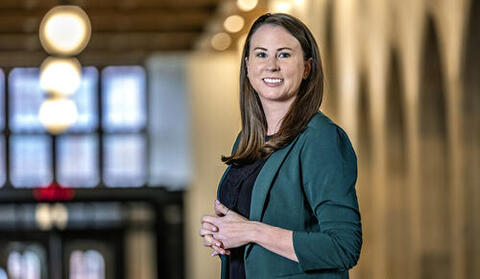 Stacy Malaker is all about putting in the work.

It’s true in sports, which she loves; it’s true in every job she’s had since high school; and it’s true in her chemistry lab at Yale, where she set up shop earlier this year.

An assistant professor of chemistry, Malaker uses mass spectrometry to analyze the relationship between human disease and a group of proteins called mucins. We caught up with her for the latest edition of Office Hours, a Q&A series that introduces newcomers to the Yale faculty to the broader university community.

You’re a first-generation college student. Does that give you a different perspective on the way you go about your research?

I’ve always had to fight for things I wanted in life. It’s made me tenacious. If somebody tells me I can’t do something, I’m going to work that much harder to get what I want.

How would you describe your work with mass spectrometry for a general audience?

In mass spec, we essentially blow things apart, and based on the way they fall apart, we can figure out what was there previously. It’s like doing mini puzzles to figure out what structures you’re looking at. I’m really interested in sugar modifications in proteins, so I specifically look at changes in those sugar modifications between healthy and diseased states and try to develop new ways of understanding that process.

Why is that knowledge important?

Altered glycosylation — sugars — is a hallmark of cancer, inflammatory bowel disease, and cystic fibrosis. Any disease that’s been studied has altered sugar structures.

What sorts of non-technical, non-academic jobs have you had along the way?

In grad school, I drove for Uber. In high school and as an undergraduate, I worked at a bulk grocery store as a stocker — I won best stocker of the year one year. As a postdoc, I worked for a catering company — bartending at weddings and funerals.

What motivates you that most people don’t know?

My older brother has Down syndrome. I am well aware that when my parents get older, I will be his caretaker. That has been a driving force throughout my life, to have stability and be able to provide for him.

What is something that people tend to get wrong about the scientific life?

One thing that’s hard for people outside of science to understand is that there is no 9-to-5. I’m constantly at work or thinking about work. There’s no off button, because I’m passionate about it. I love it.